What sports can do to combat LGBTIQ hostility.

The Federal Ministry of Arts, Culture, Public Service and Sport in cooperation with the EGLSF (European Gay and Lesbian Sport Federation), Aufschlag Wien, Kraulquappen Wien and the fairplay Initiative at VIDC invites you to an online event.

In the exchange forum European best practice examples will be shared and there will be space for exchange & discussion.

For sports associations and people interested in the topic, participation is only possible online due to the still high Corona infection numbers.

We look forward to your online participation and request registration no later than March 14, 2022 to: dorian.fischer [AT] bmkoes.gv [DOT] at

After registration you will receive a link for the online broadcast and the virtual exchange forum by mail. Simultaneous interpretation (English and German) will be available for both events. The panel discussion will be broadcast live on ORF Sport +. 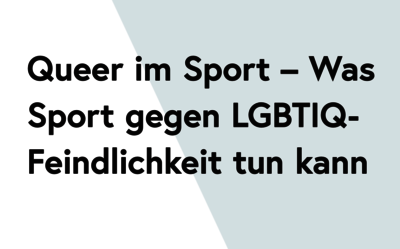 Playing football together and breaking down prejudices - the Girls Football Festival is back!