The Austrian Football League and its clubs are organizing a joint campaign to benefit the Ukrainian Charitable Foundation New Hope.

Russia's war of aggression against Ukraine has had extensive effects on the Ukrainian civilian population. In addition to many individual projects and campaigns, the Austrian Football League and its clubs are now helping with a joint campaign and are holding a charity jersey auction starting on Monday. In addition to signed jerseys of all 12 clubs, there are also jerseys of Ukraine star Andriy Yarmolenko, FIFA assistant referee Sara Telek and an official league ball with the signatures of all coaches and captains up for auction. The auction will run from 11 a.m. on Monday, Sept. 19, until 11 a.m. on Monday, Sept. 26, also.

Click here for the overview page of all exhibits:
all exhibits of the charity auction

All proceeds from the charity auction will benefit the Ukrainian Charitable Foundation New Hope and will be made available to aid workers in Zaporizhzhya for humanitarian support services to protect citizens. Ukraine's troubled Zaporizhzhya region is occupied by Russian troops and subject to regular rocket fire. The city of Zaporizhzhya provides refuge from Russian aggressors to the fleeing population from eastern Ukraine.

The charity auction is made possible by the Austrian Football League and the association Jugendinitiative Triestingtal and supported by the cooperation of the organizations Kicken ohne Grenzen, Käfig League, Geomix, ballesterer & fairplay.

The jersey auction is already the second aid campaign of the Bundesliga for Ukraine. About two months ago, on the initiative of UEFA assistant referee Sara Telek, the league, together with league supplier Geomix, provided training packages with clothing and shoes for nearly 100 children who fled to Austria from a soccer school in Zaporizhzhya. Equipped with training gear, the children and young people will hopefully soon be able to pursue their passion for soccer on a regular basis again here in safety. A small number of them are already training with the Burgenland Football Academy, SKN St. Pölten, FAC and Wiener Austria, among others. A few weeks ago, a new alternative location of the soccer school in the west of Ukraine was equipped with balls by FAC Vienna, among others. 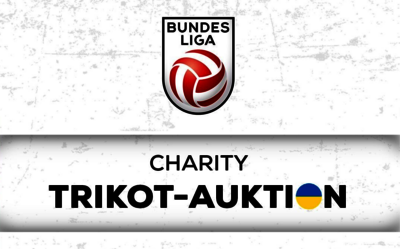 Indoor tournament in Fischamend as part of "Our Game for Human Rights".